Professor Mihalis Mathioudakis for pioneering contributions to the development of high-cadence, large-format cameras for next-generation astrophysical telescopes and their application to dynamic imaging of the Sun’s tenuous atmosphere. 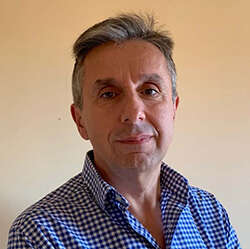 Professor Mihalis Mathioudakis is a renowned international expert in solar physics. He has had an illustrious career to date, culminating in his leadership role for the development of large-format, high-cadence detectors for the next-generation of astronomical facilities.

These novel cameras have been successfully commissioned on the world’s largest solar telescope and will unquestionably improve our understanding of dynamic processes occurring within the Sun’s tenuous atmosphere.

In 2013, Mathioudakis spearheaded a consortium of eight UK research institutes working towards the common goal of developing the UK’s involvement in upcoming and completed solar telescopes, including the Daniel K Inouye Solar Telescope (DKIST) in Hawaii, US – the largest solar telescope in the world with a 4-metre aperture.

In 2015, he was awarded Science and Technology Facilities Council (STFC) funds totalling over £2m for the design, prototyping and delivery of DKIST’s cutting-edge visible imaging cameras, which made the UK a formal partner in this revolutionary $400m (£295m) facility and guaranteed observing time on the world’s largest solar telescope.

To fulfil this objective, Mathioudakis bridged academic and industrial themes through collaboration with the Northern Irish company Andor Technology. The leadership efforts of Mathioudakis were recognised by the delivery of these novel cameras – named ‘Balor’ after the supernatural beings of Irish mythology – which were successfully used as first-light detectors on DKIST. The images that the Balor cameras acquired were the highest resolution snapshots of the Sun’s atmosphere ever recorded, with their global impact enough for them to grace the front cover of The New York Times in 2020.

The Balor camera has found wider applications, including near-Earth object detection and tracking, protein crystallography, and computed 3D x-ray tomography. The impact of this work has been highlighted by UK Research and Innovation in STFC’s Innovations Club Newsletter (issue 53) and the Astronomy Evaluation Report (2019). The work pioneered by Mathioudakis has opened up new technological markets and provided strength and diversity to existing research efforts.

Mathioudakis’s contributions to the field of physics are extraordinary, allowing him to foster collaborative research and lead a group of universities and UK industry towards a common objective, which has enabled knowledge transfer and made the UK consortium formal partners in the DKIST facility. It has also created a step change in observing possibilities with the production of the Balor imaging cameras for the world’s largest solar telescope.

Ultimately, these endeavours culminated with the images captured by these cameras being voted as “one of the best science images of 2020” by Nature.