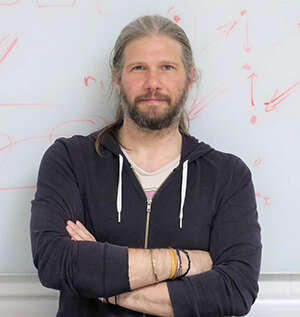 Professor Mete Atatüre is a world-leading scientist in solid-state quantum optics, particularly renowned for the development of quantum interfaces between photons and spins.

His earlier work on semiconductor quantum dots (QDs) included the first demonstration of all-optical spin initialisation, the first observation of the Faraday effect for a single spin, and the first deterministic coupling of QDs with optical cavities.

Following his 2007 move to the UK, Atatüre led his team to their first great success in demonstrating resonance fluorescence from a QD spin, which became the primary technique in this field. They then achieved the first nondestructive optical detection of spin quantum jumps in real time.

In 2012 his team reported the generation of sub-natural linewidth QD photons with laser-quality coherence, followed in 2015 by the first observation of quadrature squeezing of a single photon – a fundamental property predicted in 1981, but then deemed impossible to observe.

Atatüre’s team then demonstrated quantum entanglement between distant QD spins, which still holds the rate record for photon-measurement-based entanglement among all systems.

Building on their more recent series of work on optical polarisation and cooling of the QD nuclei to enhance electron spin coherence, in 2019 Atatüre’s team achieved the first all-optical coherent control of nuclear many-body states – an exciting development for deterministic quantum memories.

In diamond, he pioneered research towards novel colour centres by revealing that silicon-vacancy spins can be accessed optically, and then in 2014 demonstrated coherent control of single SiV spins.

He continues to lead this field with important contributions to the investigation of the other group-IV colour centres. In atomically thin 2d materials Atatüre and his team developed the first atomically thin quantum LED and, in 2017, invented a fabrication method for creating deterministic and large-scale quantum-emitter arrays in layered materials.

He routinely gives highly attended public talks promoting the role of science and optics in society, as well as addressing topics like the importance of scientific integrity, the diversity of the scientific community and widening participation in higher education.