Bethan Cornell for her cross-disciplinary work in atomistic and molecular modelling, her contribution to improving gender balance and supporting minority groups in physics, and for promoting the interests of early career researchers. 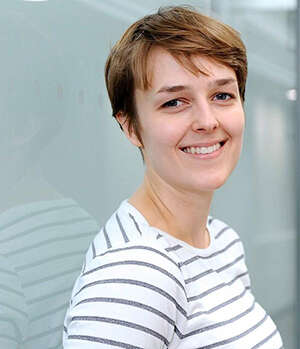 Bethan Cornell is only halfway through her PhD at King's College London but she is already making a substantial contribution to physics by engaging in truly cross-disciplinary research.

Cellular viscosity change is important in many biological processes and has been linked with cancer and Alzheimer’s disease.

Viscosity changes can be imaged with a class of dyes called fluorescent molecular rotors (FMRs).

However, the working mechanism of these molecules is not fully understood. This has limited capability for understanding viscosity change in complex environments.

Cornell’s work aims to unravel the working mechanisms of FMRs, via atomistic and molecular modelling techniques, in order to solve complex biological problems.

Despite having not yet completed her PhD she has already developed a strong network of collaborations and won numerous awards for her research.

In 2019, she was awarded the Thomas Young Centre's Junior Research Fellowship, which allowed her to spend a period of time abroad, working on new quantum and molecular modelling procedures for understanding fluorescent, viscosity-sensing probes.

Alongside her research, Cornell is passionate about improving opportunities for others in physics. She is the volunteer coordinator for the Gender Action schools award which helps schools to redress the gender imbalance in subjects including physics.

She's a mentor for the social mobility foundation, encouraging physics students from disadvantaged backgrounds with their university applications and hosting them in the lab.

As an undergraduate she was on the writing panel for Exeter university's Athena SWAN award.

Cornell also has a strong record in teaching and mentoring undergraduates for which she has been awarded an Associate Fellowship of the Higher Education Academy.

She also engages with local councils providing tuition and mentoring for care leavers aspiring to go to university and working with school teachers to develop their science curricula.

Cornell has worked tirelessly to improve the experience of early career researchers. She's been the lead academic representative in each institute she has attended and has championed the voice of physicists at both national and international level.

She has spent time working for the Higher Education Policy Institute and also speaks for physics as a Royster Global Fellow – a prestigious award aiming to develop the next cohort of global academic leaders.

Outside of the lab Cornell enjoys public engagement. She's event managed physics 'Pint of Science' events in local pubs and has been to numerous schools as a STEM Ambassador, running her own 'be a scientist for the day' activity.