Professor Geoffrey Hall for his pioneering work in developing silicon detectors and front-end electronics for particle physics experiments, especially in crucial radiation-hard applications, critical for the observation of the Higgs boson in 2012. 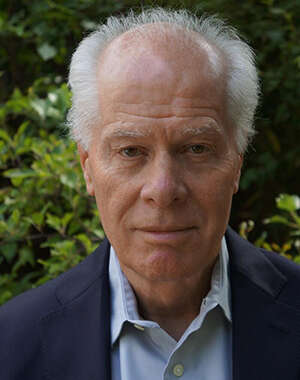 Particle physics experiments grew in size and complexity in the 1980s. For inner tracking this entailed as much miniaturisation as possible of the electronics.

The Large Hadron Collider (LHC) imposed further demands of speed of response and radiation tolerance. Radiation exposure at the LHC far exceeds levels that are encountered in space, whilst military use usually requires only one-time use.

Radiation damage in solid-state materials, both for sensors and electronics, was an almost unknown field in particle physics. Therefore, for the success of the LHC programme R&D was vital. For electronics this meant the introduction of new technologies such as 0.25µm CMOS, FPGAs and optical fibre links.

In CMS data from some 10m silicon-microstrips are recorded every 25ns; low cost, speed, low power consumption, tolerance to high levels of radiation and reliability were of utmost importance. Geoffrey Hall devised a deconvolution of amplifier signals in the front-end ASIC to achieve a sufficiently fast response and save power.

This became the APV chip, in 0.25µm radiation-hard CMOS. This development was also crucial to the success of CMS’ electromagnetic calorimeter, and consequently the detection of the Higgs boson via its two-photon decay mode, as a late and forced change of the front-end electronics had to be made.

Hall played a pivotal role in making a success of this change.

Only one specific example of the impact of Hall’s work is given here. In 1990 Hall, and his doctoral student, discovered the phenomenon of ‘reverse annealing’. Irradiated sensors progressively become more p-type as radiation damage accumulates, and the detectors stopped functioning.

Hall and his student showed that cooling the sensors was a means to control this phenomenon.

The importance of this observation for particle physics cannot be overstated. All silicon detectors in a high-radiation environment at the LHC are now operated below around -20oC. This has proven to be vitally important for all physics results using LHC detectors, including the discovery of the Higgs boson.

Recently, Hall has carried out further innovative work on the upgrades of the CMS detector to handle 10 times more integrated luminosity, requiring even more radiation electronics and sensors.