Professor Nader Engheta for groundbreaking innovation and transformative contributions to electromagnetic complex materials and nanoscale optics, and for pioneering development of the fields of near-zero-index metamaterials, and material-inspired analogue computation and optical nanocircuitry. 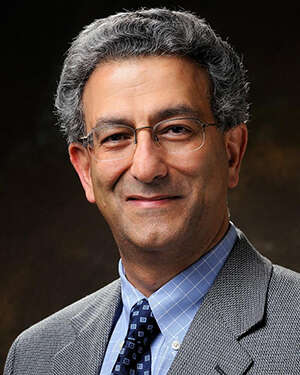 Professor Nader Engheta’s trailblazing contributions to the physics of light-matter interactions have been monumental.

He has introduced and pioneered several transformative fields in electromagnetic and optical sciences, and is considered the father of material-based analogue computing and optical nanocircuit elements, near-zero-index physics and plasmonic cloaking.

His work on physics of epsilon-near-zero phenomena has introduced an entirely new paradigm for light-matter interactions. His scattering-cancellation cloaking work provided new mindsets in science and technology of stealth mechanism.

As one of the original pioneers of modern electromagnetic metamaterials, way ahead of his time, Engheta’s creativity has opened doors to numerous other new topics and innovations in nanophotonics and physics of light.

In his paradigm-shifting field of optical nanocircuitry, Engheta and his group invented and demonstrated that nanoparticles can function as ‘modularised’ optical circuit elements manipulating light at the nanoscale.

The consequences of this innovation have been immense.

For instance, his subsequent development of concepts of graphene metamaterials, as a paradigm for one-atom-thick optical devices, and nanomaterial-based nanophotonic analogue computing have been revolutionary.

His optical modularised nanocircuit elements have powerfully linked and merged nanoelectronics and nanophotonics, and enabled revolutionary two-way transfer of fundamental concepts between these two fields.

Read more about the Isaac Newton Medal and Prize.