Professor Alexander Shluger for the development of new theoretical models of defects at the surfaces and interfaces of insulators and mechanisms of imaging and manipulation of surface atoms and molecules using atomic force microscopy (AFM). 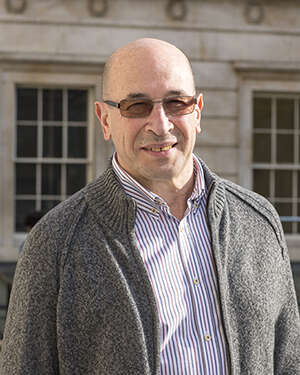 Professor Alexander Shluger has made seminal and wide-ranging contributions to surface and nanoscale physics.

He has developed new theoretical models of atomic force microscopy (AFM) and mechanisms of structural and chemical modification of surfaces and interfaces of insulators by electronic excitation and carrier injection.

As one of his major contributions to surface science, he pioneered using computer modelling to understand mechanisms of high-resolution AFM imaging of insulating surfaces, and developed many of the currently accepted computational methods and theories.

These theories first explained the true meaning of atomic resolution in AFM experiments in air. They have since been particularly influential in demonstrating the mechanisms of atomically resolved imaging of ionic surfaces and defects in vacuum and, recently, in liquids.

They provided deep insights into the roles of AFM tip structure, surface distortion and atomic dynamics in image formation in both contact and non-contact modes of AFM operation, and the atomistic origins of friction. They explained the mechanisms of manipulation of atoms and molecules at ionic surfaces using AFM tips.

These models set standards for the interpretation of AFM images. They continue to guide experimental groups towards establishing the chemical nature of atomic features in AFM images in vacuum and in liquids, and using localised forces for imaging and manipulating atoms and molecules at surfaces.

Equally important are his outstanding contributions to developing atomistic models of defect formation and defect-related processes at the surfaces and interfaces of insulators induced by electronic excitation and carrier injection.

In particular, he discovered the excitonic mechanism of site-selective modification of alkali halide and oxide surfaces and nanoparticles using light sources. This theory explained how the yield, electronic state, and velocity distributions of desorbed atoms can be selected using tunable laser excitation.

It provides the basis for our understanding of controlled manipulation of the physical and chemical properties of oxide nanoparticles using light.

Shluger established many of the existing models of defects at the surfaces of crystalline and amorphous MgO, SiO2, ZrO2, HfO2 and other oxides and their interfaces with Si and metals, and at oxide grain boundaries.

These models predict how electron or hole injection from metal electrodes affects properties of thin oxide films and the performance of electronic devices.

These models significantly impacted industry efforts to improve the reliability of novel nanoelectronic devices, and are increasingly used to understand the atomistic mechanisms of dielectric breakdown and resistive switching of amorphous oxide films.