For producing bone-tissue-equivalent thermoplastic and his support in developing a 3D-printed full-sized pelvis phantom employing this material to test prototype gamma-ray detection probes for cancer treatments. 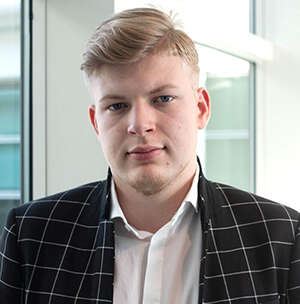 Jamie Mewburn-Crook started his apprenticeship with the National Physical Laboratory (NPL) in September 2018 as a junior scientist in the Medical Radiation Physics Group.

He moved into the Materials Characterisation Group in September 2019 and has contributed to the outreach programme throughout.

Whilst in the Medical Radiation Physics Group he contributed to the development of a pelvis phantom which allowed a UK-based medical instrument developer to test prototypes of laparoscopic gamma-ray detection probes.

This probe is intended for intraoperative detection of metastasised prostate cancer in the surrounding lymph nodes that have taken up a radiopharmaceutical.

By providing clearer data the probe could lead to a reduction in the removal of ‘healthy’ lymph nodes and provide better quality of life to the patient as a result.

A key requirement was to observe the interferences from gamma-ray scattering from the pelvis on the successful identification of lymph nodes that had taken up a radiopharmaceutical.

A novel bone-tissue-equivalent 3D-printing filament was developed at NPL which replicated the gamma-ray scattering properties of dense cortical bone tissue. Through 3D-printing technologies a full-sized pelvis phantom (using this material), including organs, was realised for the testing of the probe.

Jamie has brought his 3D-printing skills to the Materials Characterisation Group, which he has effectively used on many projects resulting in considerable cost and time savings. Many of his ideas are very innovative.

He has been given multiple tasks whereby he’s had to understand the requirements of the project and the physics behind it, design the relevant part to be manufactured and produce it. Scientists have been surprised and very happy with the results and quick turnaround.

Additionally, he has put in considerable effort in the metallographic preparation of materials such as oxide scales samples used to look at in service degradation of surfaces. He quickly learned the Alicona 3D microscope to measure and characterise and present the project leader with a wealth of information.

Jamie is an amazing outreach ambassador for NPL, attending 24 events in his first year. For his debut talk he fastidiously prepared, including creating a poster detailing motivation, means and impact of 3D printing in medical applications.

He has gained confidence to talk – with and without props – about wider work such as the value metrology brings to society and developed expertise in describing the SI system during the SI redefinitions campaign.

He recently attended WorldSkills UK Live and was an inspiration to those younger students looking at a physics career. He is an engaging and confident communicator who is passionate about encouraging people to investigate STEM apprenticeships.

At community events such as '20 years of water rockets', he ran a workshop teaching attendees how to create water rockets which would fly impressively, safely and reliably.

Jamie is an incredibly hard worker and a great example of what an apprentice should be.