This year’s STEM for Britain competition in parliament saw 24 innovative and talented early career physics researchers, and research students, showcasing poster displays of their research to dozens of politicians and a panel of expert judges.

It is the only national competition of its kind, and enables members of parliament to experience the breadth of the participants’ research and innovation.

The Parliamentary and Scientific Committee runs the event, in collaboration with the Institute of Physics, Royal Society of Chemistry, Royal Academy of Engineering, Royal Society of Biology, the Physiological Society, Council for the Mathematical Sciences, and the Nutrition Society.

Attracting some 500 or so entries each year, only a third are selected to present their work in parliament and compete for a Bronze, Silver or Gold award. The selected participants exhibit posters in one of the following five areas: 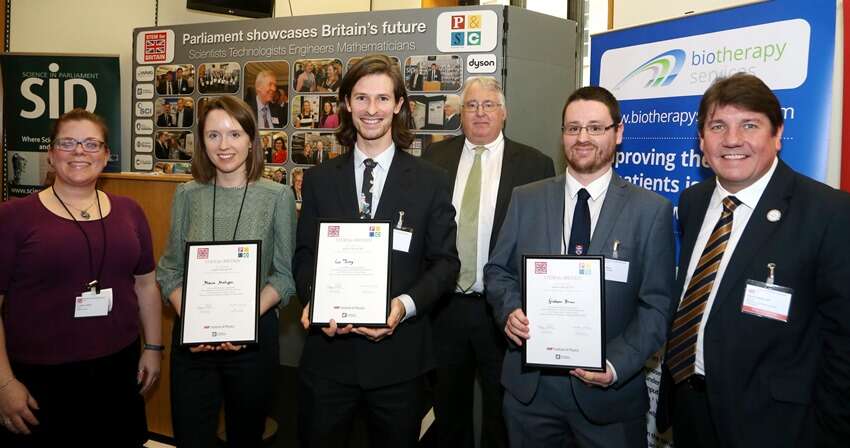 The physics prize-winning ceremony was unique in awarding an additional ‘commendation’ this year, for the first time in the history of the competition.

The special mention went to Jaqueline Sinclair, 27, a postgraduate research student from the University of the West of Scotland.

Originally from Paisley, Jaqueline studies the structure of the nucleus of atoms, to understand their properties and how those properties have an influence on the formation of heavy elements in our universe.

Remarkably, she was also attending STEM for Britain just 12 weeks after an accident meant she had to have a metal plate fitted in her left leg. When the event was over, she said that she was ‘ready for a sit down’.

The Bronze place went to Maeve Madigan, 25, a postgraduate research student at the University of Cambridge, originally from Bray in County Wicklow, Ireland.

Graham Bruce, a senior post-doctoral researcher from the University of St Andrews, won Silver. His research involves the development of new techniques and technology to measure the wavelength (or colour) of lasers.

High resolution devices which measure wavelength - known as ‘wavemeters’ - do already exist. They are applied in many areas where lasers are used to measure the world. Atoms and molecules absorb light at different specific wavelengths, so knowing the wavelength of the light accurately lets scientists measure the makeup of unknown chemical and biological samples. It also increases the precision of atomic clocks, which provide the timekeeping needed for GPS satellite navigation.

However, the research being undertaken by Graham and his team has been responsible for the development of wavemeters of such power and precision that they can carry out light wave measurements 1000 times better than current commercial devices, and are capable of measuring changes in light wavelength as small as one millionth the size of an atom. Graham and his team have even measured the wavelength of laser light with an accuracy that is equivalent to measuring the circumference of planet Earth with a precision close to the width of a human hair.

This significant improvement in precision could potentially be a game changer in many areas of scientific study and analysis, and could revolutionise the use of laser measures in healthcare, telecommunications and quantum technology.

Lui Terry, 31, a post-doctoral researcher at the University of Bristol won Gold for the excellence of his physics research, walking away with a £2,000 prize.

Lui undertook a Master’s degree in chemistry, followed by a PhD in nanomaterials at the University of Bristol, and he now works as a researcher at the University’s Bristol Composites Institute in mechanical engineering.

Lui’s research involves utilizing the effects of nanoconfinement on hydrogen. This could provide the answer to extremely compact storage of hydrogen fuel for vehicles and power generators, and may well be key to making the elusive metallic hydrogen at significantly lower pressures than are currently used.

Metallic hydrogen, is a phase of hydrogen in which the element behaves like an electrical conductor. It is predicted to be a superconductor at room temperature, which means it could be used to transmit and store electricity with no power loss, making appliances and electronics more efficient.

With the UK’s shift to intermittent renewable energy sources, this research could help deliver the long-term energy storage solutions required for the UK to adhere to its 2050 net zero carbon emissions deadline.

“I am absolutely delighted to win the Cavendish Gold Medal for Physics. It is a real honour to receive such a prestigious award from parliament and recognition for my work on hydrogen storage and superconductivity. It is a field I am passionate about, and know that one day we will be able to make real change against the climate crisis.

“It was great to be part of STEM for Britain. Events where both scientists and politicians can come together and discuss solutions to the burdens of the day are vital, and I hope to be able to attend lots more in the future.”

Some words from the organisers and supporters

STEM for Britain aims to help politicians understand more about the UK’s thriving science and engineering base, and rewards some of the strongest scientific and engineering research being undertaken in the UK by early career scientists.

Stephen Metcalfe MP, Chair of the Parliamentary & Scientific Committee, was awarding the physics prizes along with Dr Stephen Benn.

“The Parliamentary & Scientific Committee is delighted to sponsor the physics awards. This annual competition is an important date in the parliamentary calendar because it gives MPs an opportunity to speak to a wide range of the country’s best young researchers.

“These early career engineers, mathematicians and scientists are the architects of our future and STEM for Britain is politicians’ best opportunity to meet them and understand their work.”

Jonathan Flint CBE, President of the Institute of Physics, said:

“STEM for Britain provides a fantastic opportunity for some of our outstanding young and early career scientists to present aspects of their research in parliament, enabling members of parliament to find out first-hand about some of the ground breaking research taking place here in the UK.

“I warmly congratulate the winning participants, but every single exhibitor should also be very proud of what they themselves have achieved.

“I hope they all enjoyed the experience of sharing the excitement of their research with key politicians and policy makers, and had the opportunity to make some new connections within their peer groups and beyond.”